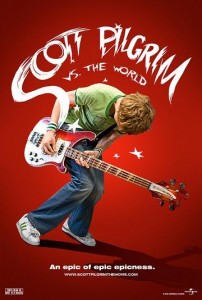 Expectations: Super low. Virtually non-existent. I am curious though.

Scott Pilgrim vs. the World has a lot going for it if you’re a nerd that enjoys references to stuff you like. Some of the more noticeable of these are video game 1ups, DDR and the Smashing Pumpkins, but your mileage may vary depending on what nerdalicious things you enjoy yourself. Anyway, the film is a barrage of cool FX that were designed to give the movie a distinctly comic book feel (or a distinctly graphic novel feel for the snobs). The FX succeed marvelously in this department and deliver what is easily the most accurate representation in motion of what the panels in a comic portray. However, this isn’t necessarily ideal for a film.

The medium is key. I’ve never read the Scott Pilgrim comics, but I’m sure this is a fair representation of them. The fact remains that what works in one medium doesn’t necessarily carry over to another, so despite all the flash (and man, there’s a SHITLOAD) the film is rather tedious, devoid of real character & substance and just plain boring. On a positive note, technically the movie is pretty sound and it is shot much more interestingly than your standard Hollywood fare, but this point is moot when everything else is a bore. I’m not within the target demographic either, so if you’re between the ages of 13-19, you’ll likely have a much different opinion. In the end, I just wanted it to be over.