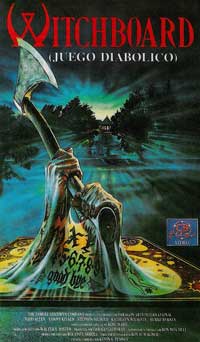 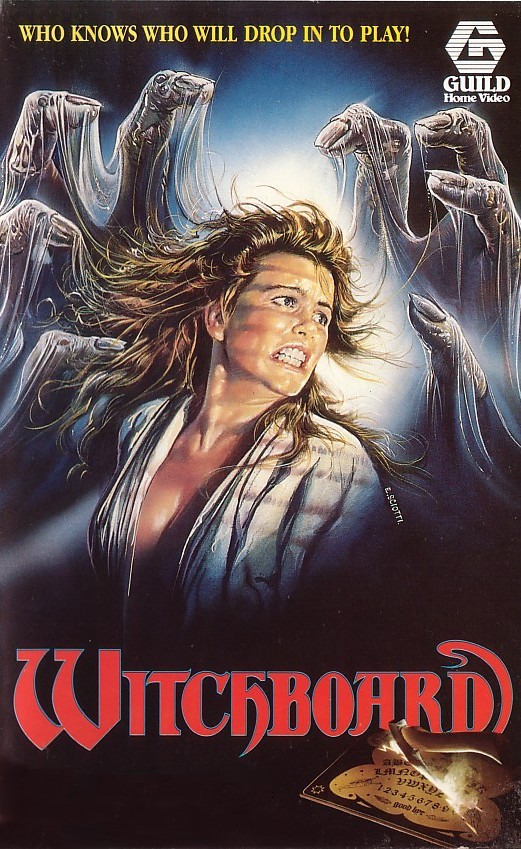 I love the poor man’s Woody Allen opening. It’s supposed to be some quasi-posh dinner party of sorts, with a couple of B-grade intellectuals sitting on a couch, rambling on about the existence of God. One of them is Brandon, the know-it-all douche I mentioned above. He babbles on about spirit portals and stuff before busting out a Ouija board and inviting his childhood crush, Linda, to sit beside him on the couch to partake in the supernatural game. He drops a brief history of the board, belittling his audience by correcting their mispronunciations (It’s pronounced “Wee-Jah”) and brushing aside their skepticism in his arrogant, ultra-douchy fashion.

Linda’s boyfriend, Jim, is brooding up and down the hallway, sucking down a bottle of Jack Daniels. He’s teetering on the edge of a full-scale shitstorm from Brandon’s blatant flirtations with his girl. Jim explains to a friend that he’s known Brandon his whole life and despite once being friends, they eventually racked up bad blood between each other and are now sworn enemies.

Brandon and Linda summon the spirit of David, a young boy who was killed in a boating accident at the age of ten. Jim, who is a babbling drunk by this point, sits across from the board, dishing out smart-ass comments while making a mockery of the dead boy, much to the displeasure of Brandon. Despite repeated warnings, Jim babbles on until the enraged spirit fires back, hurling the board into the air and across the room. Brandon eventually storms out of the party, accidently leaving the board behind.

Her interest piqued from the previous evening, Linda picks up the board and attempts to contact David’s spirit again. From here the film follows Linda’s fascination with the board and the spirit of the dead boy, who she now communicates with on a daily basis. Bordering on obsession, Linda eventually enrages the spirit, who proceeds to terrorize her with flying butcher knives and bottles of runaway ketchup. 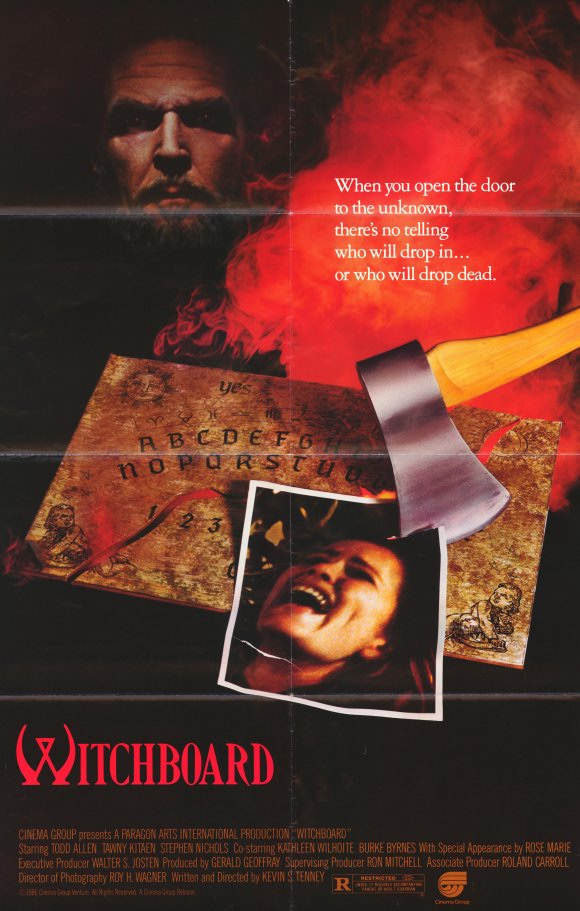 Eventually Brandon brings in a medium to calm David down. The medium is like some grossly twisted caricature of your typical 80’s valley girl. With pink highlights in her hair and a dangling keychain full of about a hundred good-luck charms, she looks like Boy George and sounds like the ghost of Jacob Marley. Her whole quirky, bubblegum chomping act falls flat, so I was not at all disappointed when she happened to fall flat herself… right on top of a spiky wrought iron fence. Good impalement scenes don’t come often, when they happen to unbearably obnoxious characters… well, that’s just gravy.

All of the kills in Witchboard are pretty good in fact. There is not much creativity involved, as most of the on-screen kills are simply a shot of a swinging axe followed by another shot of blood splattering up on a wall. But sometimes it’s those quick and simple kills which end up being the most visceral, carrying the greatest amount of “oomph”. I always use the infamous sleeping bag murder from Friday the 13th Part VII as a mental yardstick of sorts in terms of a good kill scene without the overt gore. Not that Witchboard’s reach those stellar heights, but they are definitely carried out in a similar spirit.

The film’s finale takes place in the beautiful resort town of Big Bear, where David apparently died and his presence is supposedly at its strongest, blah blah blah. Jim and Brandon set aside their differences for Linda’s sake and shack up in a local motel mending their past discrepancies. It’s at this point that the film takes a wholly unexpected turn and teeters dangerously close to some serious bromance. This whole homoerotic angle was actually ridiculously amusing in all of its overt glory as Jim and Brandon’s latent homosexuality comes bustling to the forefront. I daresay that this not-so-well hidden subtext ultimately is the most compelling thing about this film, as it works surprisingly well and ends up giving it a layer of depth seldom treaded in the genre.

Witchboard is not a bad film at all. There is a lot of inspiration behind the seemingly generic veneer here. Definitely recommended viewing for horror fans…. And gay males too, why the hell not?