Let me get this out of the way. Vamp is a fucking hoot. It’s a genuinely superb horror comedy in the same vein as Fright Night and Night of the Creeps, but it oozes enough style and a quirky tongue-in-cheek swagger to really set itself apart from the pack. There are a lot of vampire films out there, and a lot of those were made in the 80s, but only one of them features the 9 foot tall, Manute Bol lookalike Grace Jones as a freaky vampire stripper who partakes in jugular snacks from young frat boys and rips the hearts out from insolent servants.

Indeed, Vamp strikes its campy tone right off the bat and runs with it. From the clever first scene you know exactly what you’re getting into. The action follows Keith and AJ, a couple of college dregs doing what they can to enter some freaky, high-brow fraternity. With their hope almost lost, they pledge to bring in booze and strippers in a last ditch attempt to gain acceptance. With the help of uber-prep Duncan (played by Gedde Watanabe of Sixteen Candles fame) the trio embark on a trip to the big city in search of the alluring “After Hours Club”. Yeah yeah, I know what you’re thinking… this is no different from the goofy college boy antics I’ve seen before in Animal House and Revenge of the Nerds. Can’t argue with that, but it’s during Vamp’s second act that things take a turn for the better. 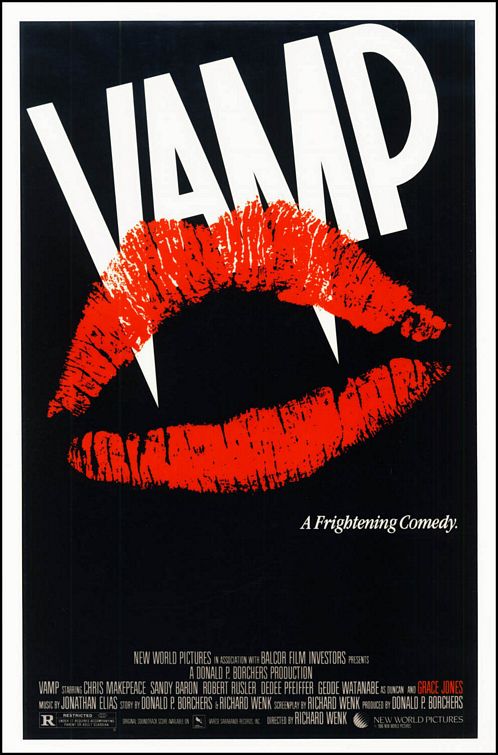 The boys finally make it to the door of the club and have to contend with age verification. Rule number one for college kids trying to buy booze / gain entrance to nightclubs / hire supernatural strippers… ditch your fucking letterman’s jackets! Luckily Vic, the sleazy proprietor, seems to have little concern for that stuff after glancing at the fat wad of cash in Duncan’s wallet and the trio gets inside with relative ease. What follows is a cavalcade of strippers ranging from tasteful topless acts, to whip-cracking, leather-clad bondage fetishists. But time seems to come to a standstill when the club’s main act takes the stage. I don’t even know where to begin here, as Grace Jones is already freaky as hell without the white zebra stripe body paint and blazing red synthetic wig. She sits on a throne made out of a mannequin of sorts while donning a bra made out of wire coat hangers and begins simulating oral sex with the dummy. The scene does definitely garner the accolades that have been heaped on it over the years, but at a great cost, as I’m pretty sure I’m scarred for life in some twisted way that will probably come up at a therapist’s meeting fifteen years from now.

After the show, she requests the presence of frat wannabe AJ, who comes up to her room and is seduced before she goes full-bore into vampire mode, baring her fangs and taking a mean chunk out of his neck. 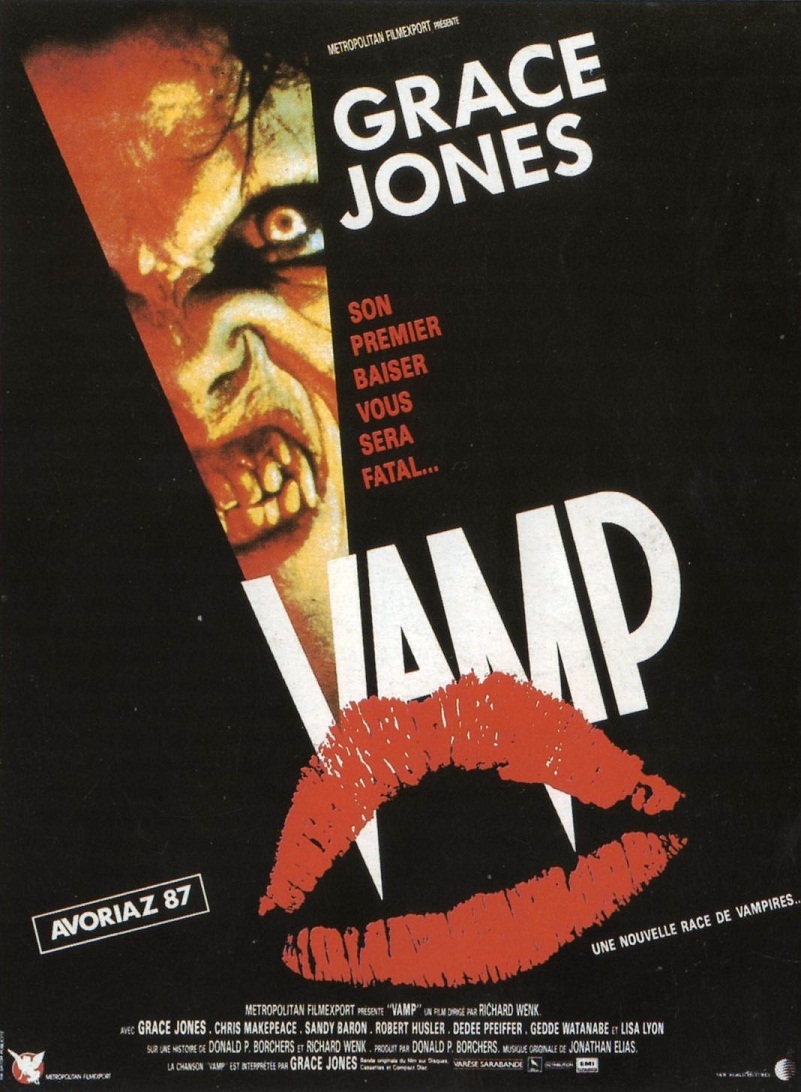 From here on out it’s full speed ahead as Keith searches for his missing pal, combing back alleys, sewage tunnels, and seedy motels while unearthing the city’s dirty little vampire problem in the process. With the aid of a childhood friend, now working as a naïve waitress at the establishment, he is tossed into that much loved and oft-used “endless night” scenario of the 80s, think After Hours while being chased by a city full of vampires (most of whom are strippers) and you’ll get the general vibe that Vamp exudes. Some may see this film as the inspiration behind Robert Rodriguez’s From Dusk Till Dawn, and rightly so, but I much prefer the fun breezy camp on display here to the harsh, in your face antics of the latter.

A point also has to be made of Vamp’s killer lighting scheme. The transition between bland daylight scenes and the eerie, supernatural night sequences are punctuated by multicolored lights which look like somebody had spilled acrylic paints onto the workprint. Rain slicked alleyways and dark dressing rooms are filled with pools of lavenders, dark greens, and deep reds. This really is some of the most creative lighting I have ever seen… Not to get all Extreme Makeover: Home Edition on your asses, but something has to be said for a film that has the ballsy fortitude to light a scene taking place in a sewer with bright pink floodlights.

Making a good horror / comedy is not an easy thing to do. Most films fail to tread that thin line between being genuinely funny while at the same time remaining genuinely scary. Vamp is a film that seemingly blends both effortlessly. Just give it a go, your entertainment is practically guaranteed here.