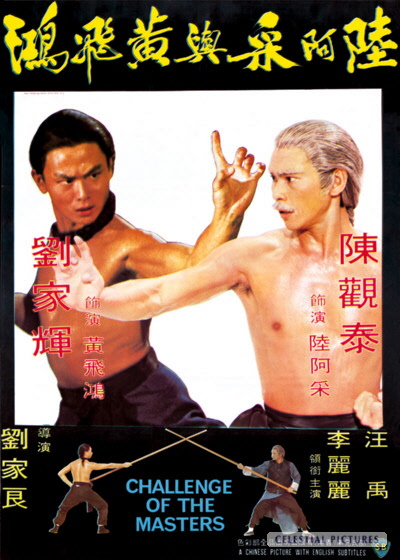 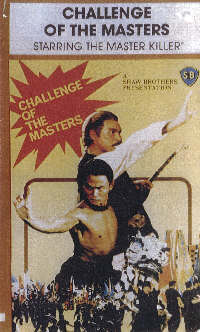 The film’s plot centers around rival kung fu schools, and their quest for notoriety in the martial world through their participation in the pao competition, a no-holds-barred sport where a bunch of batons are fired into the sky whereupon the schools make a mad grab to collect as many as they can. It comes off as a cross between European rugby and schoolyard jungle ball. The competition is both fun and action packed, as mobs of kung fu students hurl themselves into the air and at each other in order to collect as many batons as possible.

That’s all gravy in this reviewer’s eye however, as Challenge of the Masters finest moments swirl around the meticulous and delicate relationship between Fei-Hung and his revered teacher Lu Ah-Tsai, played to absolute perfection by Chen Kuan-Tai. This relationship is definitely a product of director Lau Kar-Leung’s watchful eye, who made a point of bringing real kung fu, in both its physical and philosophical forms to audiences worldwide. Every moment of Fei-Hung’s training is absolutely compelling, as Ah-Tsai’s teachings resonate not only during the training scenes themselves, but throughout the rest of the film as well. I’d go as far as to say that this is the definitive teacher / student relationship in martial arts cinema, and I wouldn’t even think twice about it.

The training itself is both grueling and brilliant in its economy as Lau Kar-Leung manages to not only squeeze two years of practice into about twenty minutes of screen time, but also makes it completely believable. He quickly cuts the brash and overeager Fei-Hung down to size with weeks of arduous stances and tedious basic footwork patterns. It’s the typical stuff you’ve seen in hundreds of kung fu films before, but never as raw and undiluted as you will see here, with a reclining Ah-Tsai puffing away on his pipe while literally beating the proper stances out of Fei-Hung with a long bamboo pole. Fei-Hung definitely has his moments of cockiness and from time to time challenges his venerable master, going as far as ambushing a relaxed Ah-Tsai, who is reading a book. The older master, without batting an eye, spins himself around and slaps Fei-Hung away with the manuscript before continuing his reading.

After months of staff training, in which Fei-Hung must focus intently on the tip of the pole while drawing miniscule circles around ceramic teacups without breaking them, Ah-Tsai takes a brief moment to drop a philosophical nugget on his now-cultured student. He mentions that after two years of training in the martial arts you will feel like you have learned everything, after twenty however, you will feel that you really know nothing. A life in the martial arts means endless discovery. Even a master can learn from the student. The student absorbs this grain of wisdom and in a climactic final test amidst pouring rain, manages to snatch the tobacco pipe from his master’s hands, thus completing his training.

I know that more often than not, people consider martial arts actors “martial artists” first and “actors” a distant second. But I challenge anybody to make that same criticism of Gordon Liu in this film (even more remarkable when you consider it was his first starring role). When he descends from that mountain, his belly full of knowledge, and mourns the grave of a deceased brother an old friend notices him and begins staring. A stoic and transformed Fei-Hung asks, “What’s wrong, don’t you recognize me?” to which the friend replies “Yes. But you look… different.” The transformation is complete. The clumsy teenager is now a master himself, carrying himself with so much dignity and righteousness that even old friends have trouble recognizing him.

Director Lau Kar-Leung plays the film’s main villain, a murderous criminal from the north who has no qualms whatsoever about kicking respected masters to death with iron-tipped boots. When the virtuous Wong Fei-Hung finally confronts the man, he easily beats him with his newfound long-pole skills. The cowering killer retreats to a bamboo thicket, where a surprised Fei-Hung suddenly has trouble utilizing his sweeping staff techniques. The staff is no longer useful and must be discarded… a martial artist is always learning indeed. Even in the heat of battle his teacher’s wisdom rings true.

4 thoughts on “Uncle Jasper reviews: Challenge of the Masters (1976)”