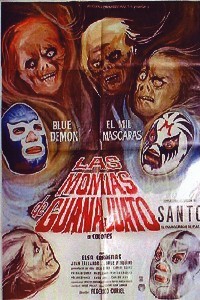 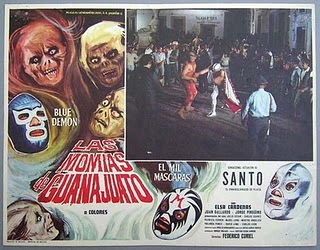 The Mummies of Guanajuato is unique in that the film is actually steeped in fact, for the most part at least. Guanajuato is a famous tourist attraction in Mexico due to the well-preserved mummified remains of the deceased who are buried there. The remains are on display in the town’s museum, which serves as the setting for most scenes in the film. The film deviates from reality precisely when the plot swings into high gear however. The drunken, midget tour guide Penguin, introduces the museum’s newest addition, a seven-foot tall mummified luchador named Satan. Satan was apparently defeated by Santo’s great grandfather 100 years prior and is set to come back to life on that very day, which also happens to be the opening night of wrestling season in Guanajuato. Holy Shit! What are the chances of that!?

Blue Demon and Mil Máscaras are in town beating the piss out of a couple of twins who look near identical to Renato the Hippie of Santo and Blue Demon vs. Dracula and the Wolf Man fame. In an unexpectedly fantastic fight, our two enmascarados give the dirty hippies a simply brutal ass-handing which features plenty of high-flying acrobatics, handstands, and soaring scissor locks. Penguin visits the two wrestlers after the fight, warning them that Satan the mummy has returned to life, to which the wrestlers dismiss as nothing more than the incoherent ramblings of a drunken midget. 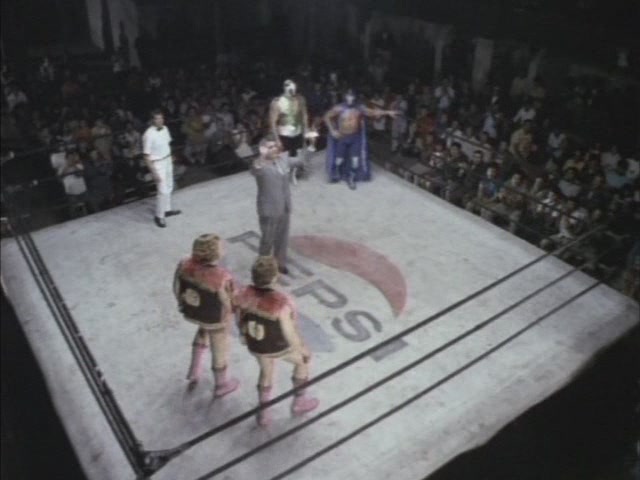 It’s only after Penguin is murdered in his hotel room that our two heroes decide to ramp up their efforts against the mummy threat. They are then attacked by a trio of decaying mummies, only to find out that they cannot be hurt, even when thrown from three-story windows. To make matters worse, Blue Demon is taken by surprise by Satan and is knocked cold. Satan steals his outfit, and in a fresh new device never before seen in lucha cinema, takes it back to the museum and gives it to another mummy, saying “You will take Blue Demon’s place.”

Coincidentally, the police receive an anonymous letter that evening telling them where they could catch the murderer. They show up to the scene, on cue, just as the fake Blue Demon is seen strangling some random stranger to death. Now the police and the mummies want our heroes dead. Even worse, while they are en route to the cemetery Blue Demon’s son is kidnapped along with Mil Máscaras’ girlfriend. With a situation this dire, the only thing that could save them is a hackneyed cliché of mammoth proportions. 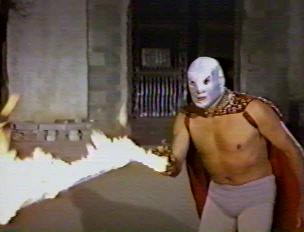 Now the ending here is a delightfully blatant exercise in cinematic half-assedness. Seriously folks, this ending is so overtly conventional and gloriously coincidental in its execution that it almost reaches new aesthetic heights all its own. It just so happens that Santo and his manager are driving through the countryside after a match when they decide to take a detour into Guanajuato because there is a hotel there that Santo really likes to stay in. Imagine his amazement when he takes a wrong turn into a bloodthirsty pack of mummies! Santo leaps out of his convertible and plows through the mummies, fists flying. He even knocks out the Blue Demon impostor several times, never once asking himself what the hell Blue Demon is doing in there with all of the mummies. Realizing that they are invincible, he hops back in the car, driving onward until he runs into Blue Demon and Mil Máscaras, who are holding their own against the horde. Luckily for them, Santo has three golden pistols in his car, which shoot fire. Burning the mummies to a crisp, they save the day.

Honestly. It’s too easy to be critical here. I choose to take a different approach and commend this audacious disregard of audience intelligence. It takes balls for a director to slap this finale onto the end of the film without once batting an eye. In a strange way it works, fitting perfectly alongside the breezy, ham-fisted, comic-book nature of the film. And in the end…who gives a shit? It’s fun.

2 thoughts on “Uncle Jasper reviews: The Mummies of Guanajuato (1972)”