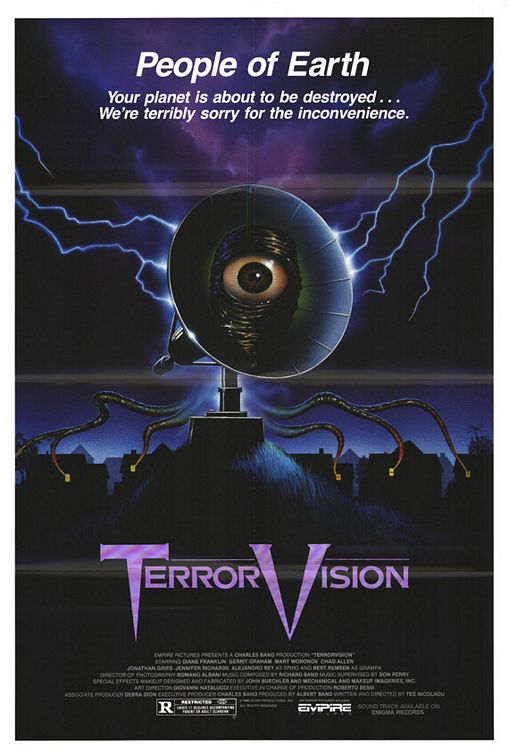 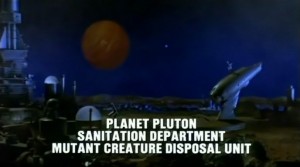 For those that grew up in the 80s, you’ll most likely remember with hazy fondness how amazing the idea of a satellite dish was. We’re pulling in 900 channels from space, darlin’! As I drove through the neighborhoods of my youth and I would spot the top half of those magical devices peeking over the fences, I’d always stare in amazement. I remember when I was around six or so, I went to a friend’s house and he showed me his Dad’s dish. It was a humbling and hallowed moment where I didn’t really comprehend what the fuck it did, but I knew it was the coolest thing I’d ever seen. So over twenty years on, watching TerrorVision sucked me right back to that moment and I was reminded how spoiled we all are nowadays to have so much information and media at our fingertips. Coincidentally as I write this, Weird Al’s 1985 song about this very thing, Cable TV, started playing off my iPod. It’s becoming aware! Skynet is live! 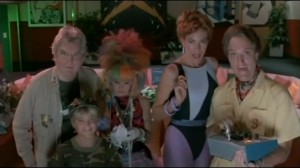 TerrorVision tells the story of the Putterman family, a truly fucked-up collection of misfits, and how the father Stanley has recently acquired one of these mystical satellite dishes. In the film’s prologue we see a trash dump on the planet Pluton as a technician tries to dispose of a monster. He inadvertently converts it to a beam of lighting and shoots it like a pinball off of the planets, until it finally rockets to Earth and directly into the Putterman’s dish. [As a side note, when the Putterman’s TV starts to work after being struck by the lightning, the first thing it plays is some Lucha Libre!] The monster is then able to project itself out of the TV, eat people and then jump back inside the set. We later find out that the monster can create clones of the people it eats as well! It’s up to twelve-year-old Sherman to don his ammo belt and his Grandpa’s M-16 and take this fucker down! I’m actually not making that up, but it doesn’t play out in the way that the description make you expect. 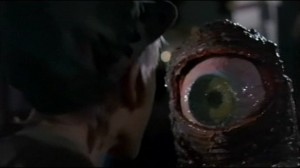 What is truly baffling about the movie is its juxtaposition of slapstick, kid-focused humor (farting monsters, etc.) and the over-the-top adult comedy, most specifically the swinger parents. Unlike most movies that might slyly mention or refer to something that suggests the parents are swingers, TerrorVision goes the opposite direction and revolves its plot around the fact. The parents bring home another swinging couple at one point in the movie and in one of the better comedic moments, the kids find them all (and the Grandpa) in bed together (but once again, it’s not what you think). In addition to the plot devices, the entire house where the movie takes place is completely decked out in 1980s erotic pop art similar to the styles of Patrick Nagel or Roy Lichtenstein. Before it is revealed the parents are swingers, I kept wondering, “Why the hell is there a painting of a bent over girl in the living room? What the fuck?” Up to that point, the movie plays out like a kid’s Saturday morning TV movie so it’s definitely unexpected. It creates an odd, mixed tone for the film, and I’m sure it’s the reason the film received an R-rating, as the gore isn’t anything graphic enough to warrant it. 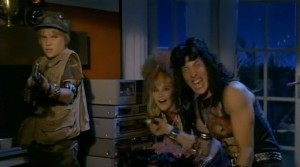 This is the first feature from frequent Empire/Full Moon editor Ted Nicolaou. He made his directorial début with the fun, Road Warrior-inspired Desert Pursuit section of Ragewar. His directing here is average and serves the film well, but overall it is nothing special. His script is about the same, with lots of jokes hitting and others falling flat. My favorite part of the movie (besides the wicked bad monster) was the ridiculous metalhead boyfriend, O.D. (Jon Gries, who later went on to play the football-throwing uncle in Napoleon Dynamite). This guy has some truly killer lines such as:

“You see that? He looked right at my studs and cooled out. This dude’s into metal!”

Or this one that I wouldn’t mind incorporating into my everyday jargon, “Too rude!” Makes me think of the glorious days of my youth when all you needed to be cool was a Rude Dog t-shirt and a scowl.

The FX for the TV creature were done by John Carl Buechler and it is a piece of work! The main body of the creature features a huge, floppy mouth that makes him look like a Snuffleupagus from the other side of the tracks. He also has a giant tentacle with an equally large eye on the end of it. What’s funny about the eye tentacle is that the creature has two normal eyes in his head proper, but one is all squinty and not of much use and the other one just seems to spin around aimlessly. I have to deduce from this that the tentacle eye exists as an evolutionary mutation within the physiology of this creature because its standard eyes consistently became useless before the end of the creature’s life. Damn. I’m a nerd. 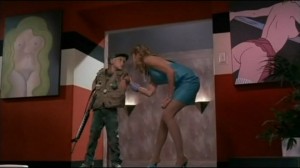 Overall, Terrorvision isn’t all that great but it isn’t all that bad either. It’s a fun little movie if you go in expecting something slightly less than a fun little movie. It has a unique tone and the adult humor adds an unexpected dimension to it. There’s a plot twist late in the movie that bothered me a bit until I remembered that it was a standard 80s plot line of kid’s creature features and I should have seen it coming. I can’t say that I recommend it, but it does have a healthy level of weirdness that you won’t find in a lot of other movies.

Come back on Monday for the final Lucha week from Uncle Jasper as he brings us a review of The Mummies of Guanajuato! We’ll also be attending the Weekend of Horrors event and I hope to have some posts up detailing some of the highlights from the many panels.