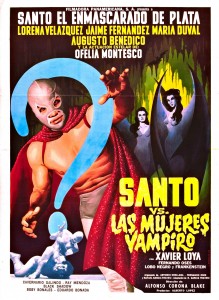 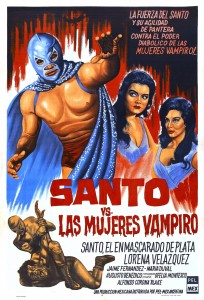 The film opens in some old, dilapidated castle on the Mexican countryside… Mexico of course being a country well known for its delicious tacos and medieval European architecture. 200-year-old vampire priestess, Tundra emerges from her coffin and proceeds to resurrect her family of gorgeous Latina bloodsuckers. With only a few months left on Earth, they need to abduct the female descendant of a certain bloodline in order to fulfill some horseshit vampire prophecy… or something like that. Honestly, the high priestess Tundra was so fucking hot I had serious problems latching on to the finer points of plot and narrative during these opening scenes. Now these aren’t your typical “I vant to suck your blood” vampires. No sir, these are truly some wicked ladies… their queen, Zorina is the fucking wife of Satan! To aid them in their quest, Tundra creates a trio of three male vampires who practice deadly karate blows capable of rendering seasoned luchadores unconscious.

The vampires discover that Diana Orlof, daughter of famed Mexican scientist Professor Orlof is their intended target. Now anybody already familiar with the films of Santo knows that in addition to being El mejor luchador del mundo, he is also a brilliant man of science, in league not only with Mexican officials, but also with the greatest thinkers in the country. Professor Orlof is already privy to the vampire plot to kidnap his daughter, having spent many a late hour poring over ancient vampire scrolls. Desperate to save his daughter from the dark rituals, he calls up Santo on the typical Santo video conferencing thing with the twirling antenna and flat-screen TV. Everybody who’s somebody in Mexico has one of these things I guess. Santo, despite his busy schedule of wrestling with aliens, protecting the homeland, and driving sexy ladies all over the countryside in his tiny convertible, agrees to protect Diana at all costs. 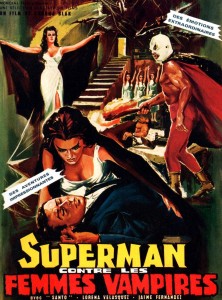 After being ambushed a few times by the vampires, who get thrown around a bit before transforming themselves into rubber bats and fleeing, Santo decides to clear his head a bit by returning to the ring in a battle against generic luchador, “Black Mask”. When Black Mask decides to take a nap before the fight typical genre conventions take over without missing a beat… one of the male vampires breaks into the locker room, knocks Black Mask out, and in predictable fashion steals his outfit.

The battle in the ring between Santo and the Black Mask impostor is not only the greatest moment of the film, but is one of the defining moments of the Santo filmography. Rarely have I seen a Santo fight explode with such high-octane energy as is displayed here. Black Mask tosses Santo around with flying leg takedowns and devastating karate chops while Santo cranks it up a notch with excruciatingly painful-looking arm locks and back twists. At one point the masked vampire even knocks Santo unconscious! Definitely something you don’t see often in these films. Overwhelmed by the sheer power on display, Santo remarks, “That’s not the Black Mask… he’s using deadly karate blows on me.” Santo responds with karate blows of his own, which sends a rage-fueled Black Mask out of the ring, madly swinging at members of the audience indiscriminately. Just when you think the moment couldn’t contain another ounce of insanity, Santo manages to unmask his adversary, only to reveal… The Wolf Man! The dude then just goes straight-up berserk, karate chopping the shit out of police and anybody else within an arm’s reach before transforming into a bat and flying away… Whew! This scene alone makes up for the somewhat anticlimactic ending that follows shortly after.

Although Santo vs. the Vampire Women is woefully uneven in spots and lacks some of that “who gives a shit” wackiness of the later films, it makes up for it in style and atmosphere. Putting this up against a film like Santo and Blue Demon vs. the Monsters only makes you appreciate just how much of a foundation was laid here, and is a good indication of how far the series actually evolved over the course of his great career.