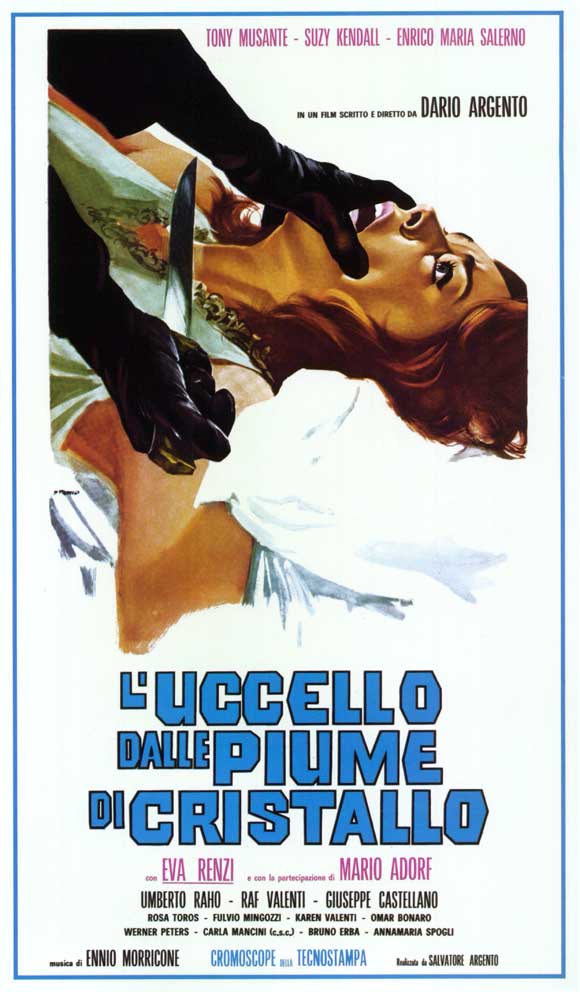 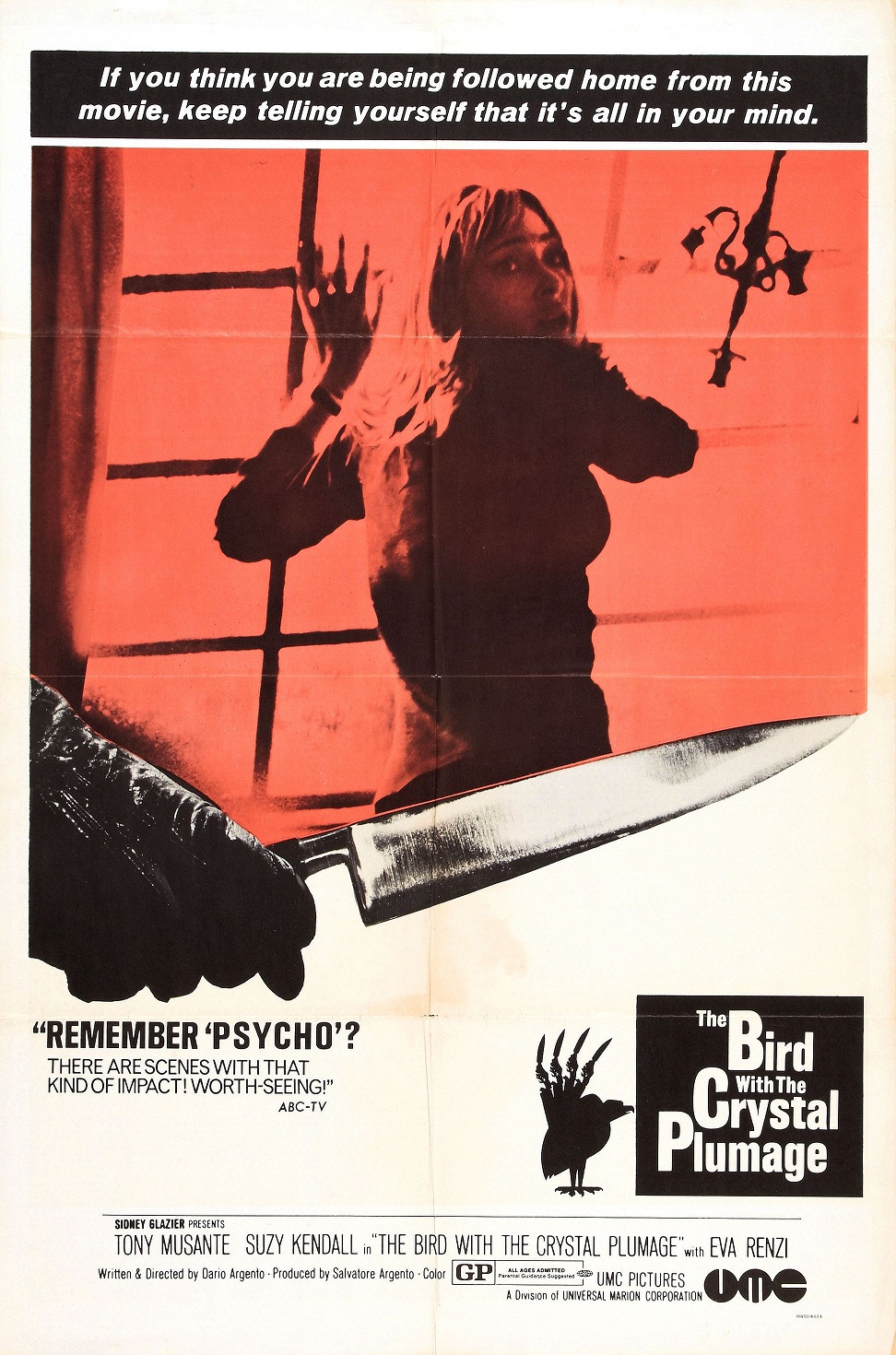 The story is fairly simple in its structure but as it is a well-told mystery, there are a number of possible suspects and red herrings to intrigue viewers. In classic horror movie fashion, a murderer terrorizes the city by murdering young girls. Perhaps this is the first film to use the clichéd story, but somehow I doubt it. While walking home one evening, Sam (Tony Musante) notices a scuffle in an art gallery across the way. A woman fights with a man completely garbed in black clothes. A knife flashes and the man runs off when Sam tries to enter the building. The killer seals Sam inside the glass entryway though, so he is unable to attend to the dying woman. She stumbles down the stairs and collapses. Sam tries to converse with her, but the glass chamber he is sealed within prevents any meaningful communication from happening. This sequence happens just a few minutes into the film and is absolutely riveting. Sam becomes as helpless as the wounded girl, stuck inside his glass prison.

The girl survives the encounter, but that doesn’t stop the police from questioning Sam with vigilance. He becomes a top suspect and in order to clear his name, he begins an investigation of his own. From here we follow his logic down the line as he tries to connect the dots between the different killings. Watching this in 2010, tons of the things in The Bird with the Crystal Plumage have since become genre standards. This doesn’t take away from the film at all though, as it’s clear that this did it before the imitators could get their hands on it. Like the often-imitated Django or A Fistful of Dollars before it, The Bird with the Crystal Plumage sent the Italian film industry swirling into a frenzy that led to the shift from Westerns to Giallo (Horror / Thriller) pictures. There were films made within the genre prior to Argento, but it was only after this film that they caught on like wildfire. It is with good reason, as The Bird with the Crystal Plumage managed to keep my attention throughout and throw Sam and me into tense situations of genuine suspense. 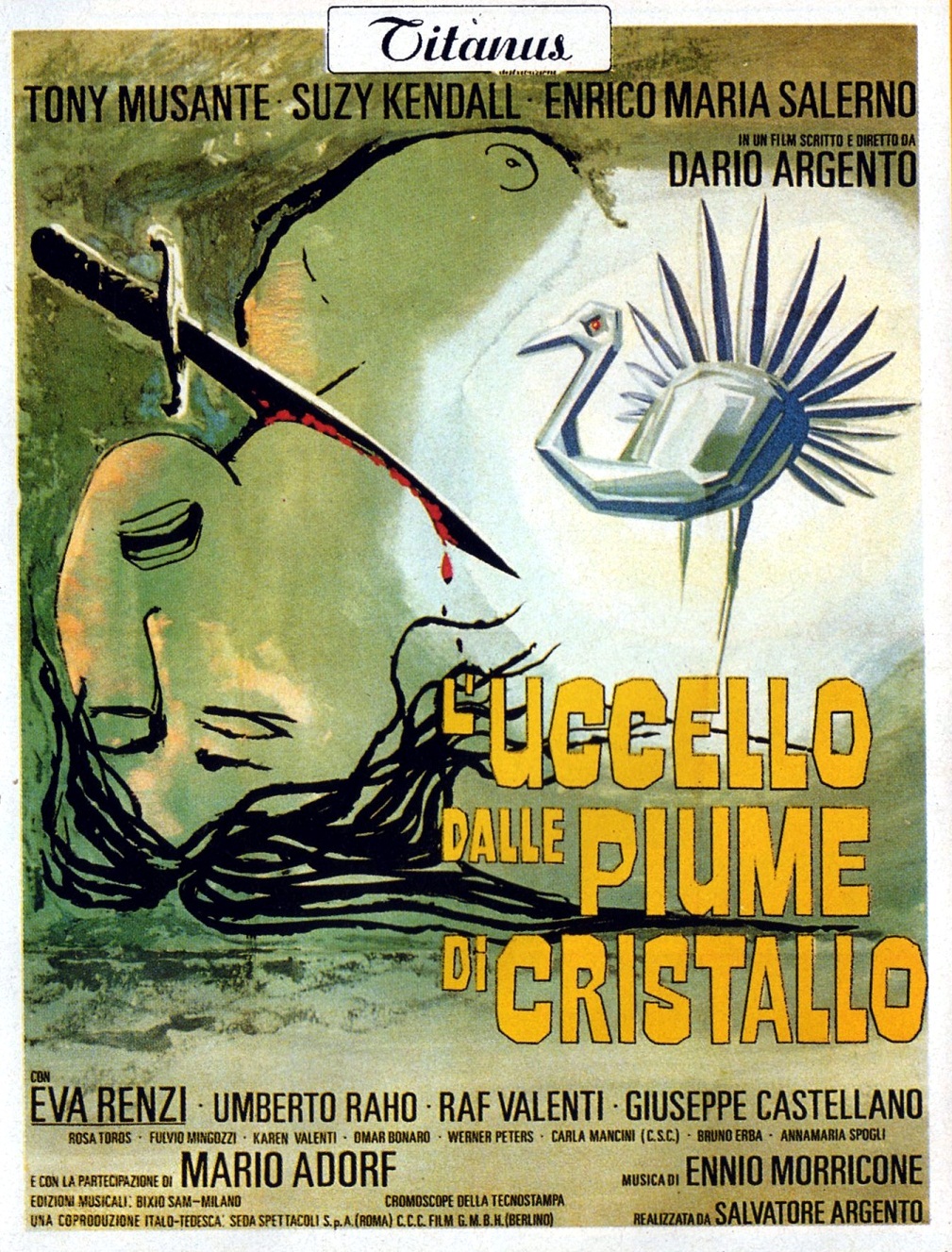 The cinematography is absolutely top-notch and I really should have expected no less from the renowned Vittorio Storaro. He went on to win three Academy Awards, the first of which he won for Coppola’s amazing film, Apocalypse Now. Storaro creates shots throughout the picture with an impressive range of color depth and palette, but the most stunning shots in the film come from the use of darkness. Single objects enter frame from absolute darkness and their emergence is given immense power because of it. One particular shot towards the end is probably my favorite of the picture. Sam opens the door that story-wise will finally shed light on what he has tracked down the whole movie. The door opens into absolute darkness and the light from the opposite side casts him in a striking silhouette. It is an image that will reside in my mind for years to come. It reminds me a lot of Frank Miller’s best work on his Sin City books, where sharp white lines on a black page paint a picture more colorful than an entire rainbow.

But I had previously mentioned that this was ultimately a flawed film, so I would be remiss not to own up to why the film isn’t everything it could be. First off, the story starts to drag in the later part of the second act, with a couple of needless scenes (mainly the scene with the painter) that only serve to draw out the film’s length and let some air out of the balloon. I actually really liked the scene itself, but I don’t know overall how it contributes to the film. Secondly, and I question myself listing this as a flaw, but Argento’s style is at times off-putting. At the same time it is a big reason why the film is important and is still regarded as a classic today, but aspects of his style are more pretentious than they probably need to be. Some of this can be chalked up to youth, but I won’t know how much until I go through more of his work. Specifically, his editing style with occasional, unnecessary jump cuts is what bothered me. In one of the final scenes, images of a plane taxiing on the airport runway are cut together feverishly for no apparent reason other than to look cool. 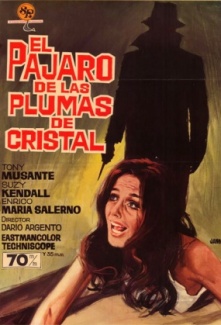 And to Argento’s credit, it is cool. It’s effective in creating interest in a somewhat mundane occurrence, so as much as I may fret at its inclusion, his use of jump cuts actually works. I’m willing to forgive moments of style without substance in this case because in other instances he uses editing like a master, such as when Sam tries to remember what he saw that night in the gallery. As he ponders, we get a quick flash of the previous scene. It mirrors what is going on in the viewer’s mind. Were we able to see the man’s face? I don’t remember, do you? It’s incredibly well-done. Argento also uses the camera to portray a first-person view on certain events throughout the film, notably for the viewer to see through the murderer’s eyes. I greatly enjoyed these shots and they are by far some of the best uses of first-person in film that I have seen.

The film also features an Ennio Morricone score, but it is unlike any score I have ever heard from him. There aren’t many melodic lines in any of the tracks and it mostly consists of ambient, mood music and slightly dissonant jazz. It works perfectly for the film and still features Morricone flourishes like the use of non-lyric based vocal choruses. It’s just important to set your sights for a different type of Morricone score if you are a fan, as this is a score completely its own.

Ultimately, the film is a success. There are tons of inventive uses of the camera and the framing is excellent. Unfortunately, it stumbles a bit by being slightly slow and boring at times, and the acting from some of the players might leave a thing or two to be desired. This is all forgivable though when the filmmaking surrounding these flaws is so vibrant and passionate. Argento truly knows how to shoot a film and I greatly look forward to next Wednesday’s film, his sophomore effort The Cat o’ Nine Tails.