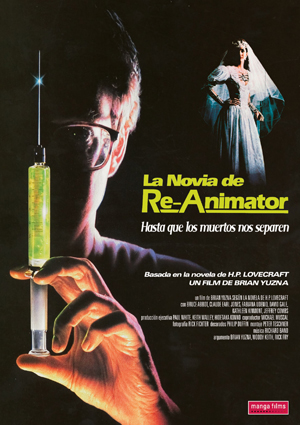 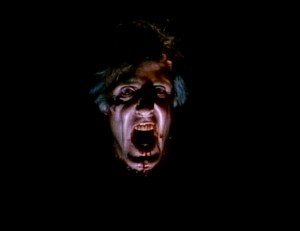 Before this short scene comes one of the greatest openings in the history of horror films. The disembodied head of the first film’s villain floats on-screen and delivers the classic opening line, “West! You bastard! You did this to me! But you’ll not escape me this time!” Unfortunately, the rest of the film doesn’t equal this awesome, cheesy opening, but you can’t win them all. The film suffers from a myriad of flaws. A weak script, wooden acting and bad directing, just to name a few. The special FX are pretty good throughout though and really are the film’s saving grace.

The main storyline is concerned with the creation of this bride of Re-Animator. This title is a bit off though, as she’s billed as more of a bride to his assistant Cain than to West. He uses her as a way to get what he wants out of Cain multiple times, and like the stupid dolt he is, he is tricked into staying and helping out once more. Like the first film, the first hour or so is devoted to a slow build up of events that lead to the grand finale re-animation in the final act. This gives the film a re-tread feeling which would have been fine if it was interesting, but frankly, it just made me wish I was watching the original again. It has the curse of being boring throughout most of its runtime, with the exception of when they decide to unleash some really inventive, over-the-top moments courtesy of some great FX shots. 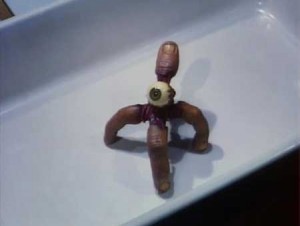 These sections are really promising, and if you can separate them from your feelings about the overall film, are an absolute joy to watch. I especially loved the finger/eye monster that serves as the first evidence of West’s ability to combine and re-animate random body parts. The results are grotesque and ridiculous and just right for a film like this. It’s like a perverted version of Thing from Addams Family and would make a perfect action figure. Imagine sitting one of these fuckers on your office desk and the resulting stares and questions. Oh, the possibilities. There’s also a great scene involving a dog that gets a leg ripped off and West grafts on a human hand. It’s only used very briefly, but for its limited time on-screen, it’s hilarious. The bride herself is fairly anti-climatic and boring after she gets re-animated though, but at least all of the “body building” scenes are good, gnarly fun.

There’s also a scene that succeeded in making me question logic & medical practices while laughing all at once. West and Cain are in the hospital they work at, treating a terminal patient. It’s set up early in the film that her body is ravaged with cancer, but her head is perfectly fine! Hmm, perhaps this perfectly fine head could be saved and used for some sort of medical research? Anyway, the patient goes into cardiac arrest and the medical staff tries to revive her. After failed CPR and defibrillator attempts, West steps in and goes to work. He slices into her chest, opens up a hole with a rib spreader and then reaches inside her body. Wow! Is he pumping her heart by hand? I think he is! I was shocked and laughing at the sheer audacity of the idea. Man, if this is what happens when you go to the hospital, I’m staying home! 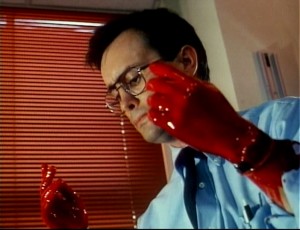 The climax of the film features the return of the Hill vs. West dynamic from the first film. It’s incredibly outlandish and over-the-top but if you’ve ever dreamed of seeing a human head augmented with bat wings flying around terrorizing people, then the finale of Bride of Re-Animator will scratch that itch. Seriously, this bat-winged head villain elevated the film half a star just on the strength of the premise. It’s all great fun, but ultimately it’s a shame that these good FX went to waste on a film that just didn’t have the chops to back it all up. The first film wasn’t a masterpiece, but it was well made with a good production values. The second throws all that out the window and is fairly poorly shot with the cheap-as-possible mentality for the overall production, with the exception of the physical FX. A tangled nerve bunch of missed opportunities story-wise, Bride of Re-Animator is fun at times, but ultimately fails to get anywhere close to the carnal enjoyment the first film produced. Recommended to serious horror junkies only.

Come back next Tuesday as we take a look at the final series sequel, Beyond Re-Animator!