Django the Bastard [Django il Bastardo] (1969)
AKA Django the Avenger, The Stranger’s Gundown

Django the Bastard takes a pretty uninspired, revenge-driven storyline and manages to turn it into the ultimate ninja film. It looks like a western, it even smells like a western, but take a closer look and you might start mistaking those six-shooters and cowboy hats for ninja stars and black hoods.

A lot has happened to our hero since the first film. First, Django’s hands have completely healed. Great! Second, Django has seemed to have taken on some supernatural powers. In fact, he is often referred to as a ghost or apparition throughout the film. When asked by a dying victim who he is, Django replies “I am a devil from hell.” It sounds a little wonky at first, but give it time and soon you will be eating it up every time you see Django disappear into thin air in the middle of a conversation, clone himself in front of an enemy begging for mercy, or emerge from shadows or thick plumes of smoke just long enough to take out some frightened gunslingers.

Click the play button to listen to the Django the Bastard theme while you read! 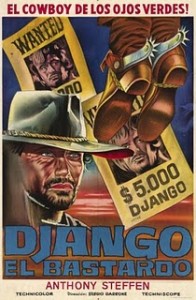 The image of the grim reaper comes to mind frequently in director Sergio Garrone’s take on the Django character. Besides defying the laws of physics, Django leaves a unique calling card to all enemies moments before killing them: a wooden cross inscribed with their name and the day’s date. The film’s incredibly stylized opening begins with Django strolling quietly into town and boldly planting his signature cross into the center of the road in front of the house of his first victim. The terrified man emerges with his gun drawn, but he already has accepted his fate, you cannot cheat death.

Anthony Steffen does a decent job here as the lead character, playing the role with a stone-faced expression and complete lack of emotion. One can look at his performance from two very different perspectives. One might say that he plays the character brilliantly as a man devoid of human emotion, who through a traumatic experience has ceased to live. On the other hand you can also say that Steffen is simply a shitty actor who hides behind the badass tough-guy persona in a lame attempt to cover up his lack of talent. I think it may be a combination of both, and ultimately have to admit that Sergio Garrone’s directing may have had more of a hand in making Django so extremely badass in this film. It’s Toshiro Mifune who demonstrated that you can be a badass and still have a personality to go with it. In any case I think most will agree that the actor dubbing Steffen’s voice does nothing to aid his cause. His monotone, faux-southern accent sounds like something straight out of the Don “The Dragon” Wilson school of acting. 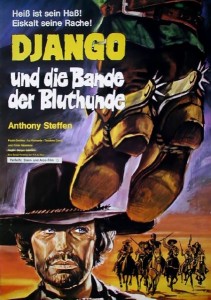 You’ll notice I haven’t mentioned plot and well, that’s because there really isn’t much of one to begin with. Django is basically hunting down the three generals who betrayed his confederate army buddies by teaming up with those dirty Yankees and wiping out his entire regiment. And yes I said confederate army buddies. I know the first film suggested that Django was an ex-union soldier, and some might get their panties in a knot over the way this film completely disregards something many might consider an integral aspect of the Django character. I on the other hand, just find it hilarious and actually admire the way Garrone simply says “fuck it” and creates his own alternate version of the Django universe. Bruceploitation anyone?

Anyway, the plot is basically an excuse to set up an incredibly awesome sequence where Django gets to play Batman in the night shadows for 30 minutes of screen time. Just watching him toy with and completely spook the shit out of a town full of roughneck outlaws and paid assassins is like taking a red-hot shot of heroin straight into the neck. You never want it to end and are left begging for more when it is eventually over. I could have literally watched it go on for hours. It simply never gets old to watch Django yank these poor guys out of dark alleyways and send their dead bodies back into town, riding horseback with giant crosses strapped to their backs. Soon these jumpy gunfighters are left frantically stuttering and drooling in fear of Django, a man they quickly begin to even question the physical existence of. They begin shooting at moving shadows, fluttering blankets, and eventually each other. Django even blends in among them with ease, sitting alongside the frightened guns at a campfire, planting dynamite and calmly walking away as it explodes behind him. Man, this is the stuff that great cinema is made of. All of my childhood dreams of stalking criminals on moonlit rooftops with deadly weapons at my disposal finally come to fruition in an Italian-made western, of all places.

Sneak back here tomorrow for Day 3 of A Fistful of Djangos, when Will gives his take on the 1967 film, Django Kills Softly!