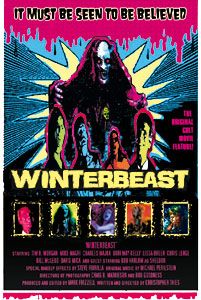 Winterbeast is the total package — absolutely sublime entertainment that continues to deliver hours after the film ends. I am still reeling and giddy in delight of the heaping spoonfuls of crazy imagery and completely irrational moments that this film threw at me. We should all stop and take a moment to consider ourselves blessed that we live in a world that allows stuff like this to see the light of day. The acting, editing, and staging are so bad, and fly so deliberately in the face of film theory that it reaches levels of incoherency not seen since the French new-wave.

It’s hard to decide where to begin, but the film’s most entertaining moments are the scenes featuring one-of-a-kind stop-motion creatures brutally murdering random hikers and mountain climbers. Far from Harryhausen’s workshop scraps, these creatures actually come off as being created and animated with tremendous care. In fact, watching these things only made me long for the days when this lost cinematic art was the standard for on screen special-effects. There are about five or six different creatures, but my personal favorite was the giant, featherless zombie chicken (that actually predates Poultrygeist by 15 years). It is only when miniature clay versions of the actors are incorporated with the monsters that it comes off as trashy, but no less entertaining. Their death scenes end up looking like outtakes from old Mr. Bill shorts. I kept waiting for one of them to be torn apart while screaming “Oh noooooooo!”

For all the quality the stop-motion creatures present, the rest of the film is so unapologetically sloppy and devoid of production values that you will be glued to the screen in anticipation of just what gaffes and technical taboos these guys will let slide by next. The film was obviously shot without sound, and at moments the voiceover work is so off that you’ll be reaching for the remote, wondering if you accidentally selected a commentary track. At other times the audio is completely drowned out by what can only be a vacuum cleaner, blender, or howitzer missile screaming away inches from the microphone.

Watch in glorious amazement as the laws of film editing are completely rewritten here. Actions are matched up in locations miles apart and scenes are ended mid-sentence, cutting off entire sections of dialogue. If it wasn’t for the excessive artifacts and visible film tears I would have thought this film was cobbled together on a couple of worn-out VCRs on a Saturday afternoon. But who really has time for editing when the Winterbeast lurks out there? 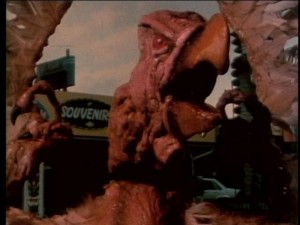 Acting takes the worst hit though. These poor guys are so wooden and artificial in their delivery that they make John Holmes look like Marlon Brando. Actors constantly flub lines and correct themselves mid-sentence while extras try not to crack smiles in the background. The world of Winterbeast is simply too intense for second takes… Obviously the filmmakers were feeling a sense of urgency in their attempt to get their message to the masses as quickly as possible. In one of its more audacious moments, a lead actor is momentarily replaced by a lookalike about 2/3rds of the way through.

I am very forgiving however, and would be able to accept all of this if the actors actually were capable of cognitive thought. These poor people are slaves to a movie logic so powerful and irrational in its sway that it compels them to mysteriously lose all facets of basic motor skill. Monsters pursue actors who inexplicably fall out of cars crawling by at five miles per hour. Where most people would vault over waist-high obstacles, these actors prefer instead to get on their knees and crash through them, kool-aid style. If these guys were capable of doing anything a normal human being might do while under pursuit, they would actually have a chance at survival. Instead we have to cringe as they flutter their arms around and scurry around in circles like deranged swamp rats. 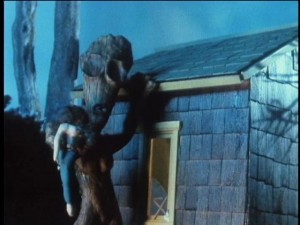 The story has to do with a resort town haunted by ancient Indian spirits and demons. Ranger Bill, who had left years earlier for the big city, comes back to his old position only to find locals terrorized over hunters and hikers who have gone up in the mountains, never to return. He orders an evacuation of the town, much to the dismay of local lodge owner, Sheldon. The guy that plays Sheldon is one of the film’s high marks. He sports a checkered blazer and looks like a flamboyant game show host. This guy is so deliciously over the top and hams it up so much for the camera that you simply cannot take your eyes off of him. Later Sheldon is revealed to be some kind of weird pervert or something… In the film’s only genuinely creepy scene he dons a clown mask and begins dancing around to kiddy records for a roomful of rotting corpses before his head spontaneously bursts into flames.

While investigating the Indian curse, Ranger Bill consults Charlie, one of the locals who tells him long forgotten local legends involving medicine men and ancient warriors in their never-ending battle against spirits and demons. He reaches for a leather felt-lined box containing some sacred artifact and – WOW! 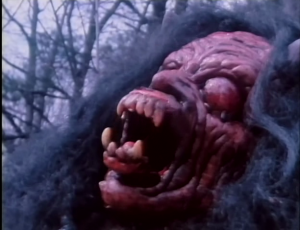 Often while watching this film I kept asking myself the question that my colleague put forth while drafting up this blog’s original mission statement; “Is it worth watching?” The answer is a resounding yes. I simply could not imagine anybody out there depriving themselves of the inane experience and exercise in disjointed filmmaking that is Winterbeast.