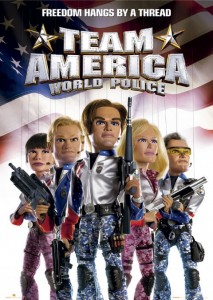 There’s a lot to like here, but a whole lot more to be bored by. I would have loved this if it was a short film, even a series of shorts. At about 100 minutes, it just seems to never end. The first 30 minutes are great, and honestly the rest of the movie is probably just as good, but there is a fatigue that sets in and I could only laugh at the same basic jokes so much.

My favorite part was a line in one of the songs, “I miss you as much as Michael Bay missed the mark on Pearl Harbor.” If nothing else, I’m glad that somewhere out there a song with this lyric exists. The other songs are also good, especially Kim Jong Il’s I’m So Ronrey but by the point it comes on in the film, I was so sick of the joke about how Asians have a hard time with R’s and L’s that it lessened the impact. The film is also lampooning the action film genre, and while it does a good job, for me it fell into the same traps as the films they were making fun of. For instance, the overly dramatic scenes with swelling music and heart-felt dialogue were just as boring as they are in big-budget action films. These scenes just weren’t funny enough for me and there’s a ton of them. The whole Alec Baldwin and his acting group, F.A.G., wasn’t funny either, bringing my least favorite parts of South Park to puppet form. “Look they’re in a group called Fag, it’s like they’re saying they’re all fags!” C’mon, you can do better than that.

The film is impeccably well made though. The production values are off the chart and the sets are lavish and fantastic. I still love the idea behind the whole thing, but I just wish that the script was smarter. I really should have known better when dealing with Parker & Stone, but hope got the better of me and my expectations were ultimately built up way too high.

If you’d like to read more positive takes on this film, you can click these links here to head over to Cut the Crap or Dan the Man’s website where there is no shortage of love for this one.