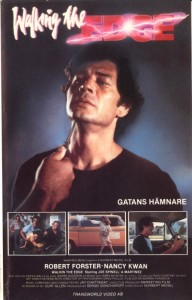 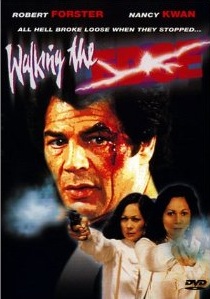 Robert Forster plays a cabbie who works for a bookie on the side. On one fateful day, Nancy Kwan hires his taxi and from then on they are intertwined in her revenge scheme. Forster plays the innocent, streetwise man with ease. The character is a bit of a loser and everyone around him knows it. Forster’s portrayal elevates the film above its simple B-movie structure and makes you care about this guy. His character isn’t exactly innocent though, as a man of the street he has the skills to get down to business when the shit hits the fan. As a side note, Forster in his youth here looks a bit like Charles Bronson, so with all the Bronson revenge films I can understand why Forster would end up making these types of films.

The film is much more well shot than I expected it to be. Filmed completely on location in Los Angeles, it was great fun for me to see the city I know so well, circa the early ’80s. Every time I watch a film from this era I am reminded how much I love the cinematography in them. The cityscapes always looks so much more real than films nowadays, something I attribute to every modern film being digitally graded. In the days before computers reigned supreme, cinematographers had to get it right on set via lighting and technical know-how and it always seems like a cheat to me to be able to fix it later in a computer. I realize the benefits (just look at the Lord of the Rings series) but I would love to see a return to actual computer-free filmmaking.

All tangents aside, Walking the Edge is a fun film. The main characters are compelling enough to care about and the villains are evil enough that you want to see them pay. What more can you ask of a revenge film? The score is also fantastic, if you enjoy the ’80s sax/synth-driven music thing. It’s not as action-packed as some other films, but it has an emotional weight that most B-pictures don’t generally contain. When it does get going towards the end of the picture, the people who deserve to get theirs, get it good and it ends up being quite satisfying. If you’re a Forster fan, or just a revenge fan, check out this relatively unknown gem.