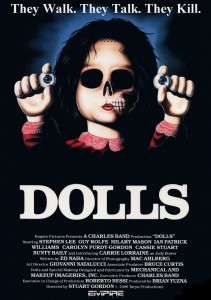 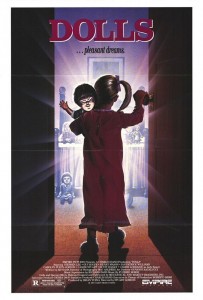 At one point on this trek for reasons I don’t recall, the stepmom throws Judy’s teddy bear into the woods. The scene that follows is pure gold. The teddy bursts out of the trees, now actual bear size, and starts attacking the parents. Soon the teddy bear begins to tear and what’s underneath the bear suit? A fuckin’ gnarly looking werewolf bear creature that just annihilates the girl’s guardians. Or so she wishes. The stepmom breaks the girl’s concentration and her fantasy goes with it. Oh well. These people were so bad that they deserved two death scenes I guess. Works for me.

The travelers happen upon an old mansion and seek refuge with the old couple living within. Soon other people caught in the rain come to the house and populate the kitchen. Just like that we have our requisite odd cast of characters that will be killed throughout the night. The longest night in the world!

The rest of the film gets pretty boring until the actual death scene of the stepmother. I won’t spoil it but suffice it to say that no less than ten dolls come to life and mutilate her in all kinds of painful ways. There’s virtually no gore, but at the same time it’s incredibly violent. I think I said “Oh shit!” about 12 times in the space of this 40-second scene. I generally measure my enjoyment of gore scenes (or action/fight scenes) in the level of “Oh shit!” that was present and this one was off the chart. I loved it so much that it made up for any shortcomings the rest of the film had, and it has a lot.

The acting is atrocious. The cinematography is passable and non-offensive, but nothing special. The effects are pretty good for the most part with the stop-motion dolls being the standout. I’m a huge fan of stop-motion and the dolls are as creepy as you would imagine. They move in a smooth, other-worldly manner that is absolutely mesmerizing. You cannot tear your eyes from them, they are beautiful and disturbing. The dolls also have a logic about who they kill that I just love. Like the Ghoulies before them, they aren’t just mindless killers.

So far I’m really loving these Empire International films. They might not be the best overall, but they are incredibly fun and entertaining. Just glancing at Charles Band’s filmography, I can’t get over how many of his films feature small protagonists. Ghoulies, Dolls, Puppet Master, Dollman, Demonic Toys… he’s definitely got a thing for little monsters. So if you also have a thing for little monsters, he’s your guy.

Dolls is definitely not a film for everyone. It’s pretty bad overall, so unless you love stop-motion or campy horror I would avoid it. If you do enjoy the trashier things in life, you don’t need a recommendation from me. You’ve probably already seen it or queued it up for your next B-movie get together.

Stay tuned for next Tuesday’s review of Ghoulies II!