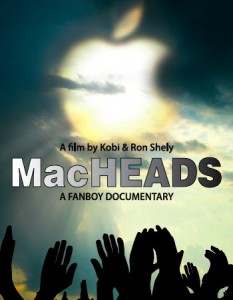 Oh yeah, I’m supposed to be talking about the movie. Anyway, the movie is fun from a people-watching standpoint, as there are a wide range of eccentric MacHeads featured here. It reminded me of Trekkies in that way and it definitely remains interesting because of them. There’s the guy that started BMUG (Berkeley Macintosh Users Group) in 1984 and now likes to wear a very amusing assortment of hats. We also have the couple that live in a bus and have a barn dedicated to their digital museum of old Mac computers. The couple had switched to Windows after the husband felt that Apple had peaked creatively and Windows offered better software. When they switched back after 10 dark years, the wife specifically cited the Mac as the source of her returned creative inspiration, allowing her to pen her Opera for Pigs. This may sound exaggerated but as an amateur songwriter myself, I can understand the importance of the tools that you use to enhance, instead of hinder, your creative flow. It still sounds ridiculous to place so much importance on the Mac, but hey, whatever floats your boat. I don’t mean to make fun of the interviewees, they all add insightful comments to the discussion of the Mac community’s roots and growth throughout the 1980s.

The film doesn’t convey a lot of information, but then I’m coming in with some base knowledge of the computer industry so for the uninformed it would probably be more informational. The film only runs one hour though, so it thankfully doesn’t overstay its welcome. It moves at a quick pace and while it easily could have been better put together it’s a fun little thing to pass an hour if you have any interest in Mac computers, computer communities or just simple people watching.