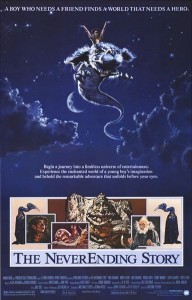 Expectations: High, this was one of my movies growing up.

Some movies should stay in your childhood. Today I found out that The Neverending Story is firmly in that category. I still enjoyed it, it just didn’t have the same power that it used to. The main character, a book-loving boy who reads The Neverending Story, reminds me of myself at that age so it’s obvious why I connected to it and enjoyed it back then. Unfortunately, viewing the film as an adult, there just wasn’t enough to keep me interested.

Bastian runs away from some school bullies and finds refuge in an old, dusty bookstore. He acquires a copy of The Neverending Story from the man there and proceeds to his school’s attic to read the book. Reading is much more fun than a math test! He finds himself absorbed in the world of Fantasia and the quest of Atreyu to save the dying princess. For the most part, the film still holds up visually. The rock biter still looks fantastic and was still able to get an emotional response from me during his dialogue about not being able to save his friends. I was always touched by that moment and it’s still very powerful. The sphinx gate scene remains very exciting as well.

On the other hand, I found that there was a real lack of substance in most other scenes. There’s two long scenes of riding the luck dragon Falcor, with pseudo-electronic music playing. As a kid, I loved it. The thrill of dragon riding! This was what movies were all about. As an adult, I was bored and it just didn’t carry the same weight. Maybe if I saw it in the theater I’d change my mind, but I remember specifically feeling the same indifference to a similar scene in one of Harry Potter movies, so probably not.

One thing I picked up that I don’t ever remember noticing is that the Nothing, the existential force of oblivion that rips apart Fantasia, is actually a representation of the modern human’s lack of hope, dreams and imagination. The bookstore owner mentions to Bastian that he should run along and play some video games because the rectangular objects in his store do not beep and boop. One could extrapolate this into the filmmakers suggesting that video games are killing children’s imaginations because someone else is imagining things for them and they aren’t actively using their minds like you do when reading. To a degree this is true, but there were probably spoken word purists who scoffed at the rise of the written word. I agree that video games do kill imagination to a degree, but someone is creating these games so imagination is alive at some level still. I suppose it could all go the route foretold in the film Idiocracy, where each generation gets less and less imaginative and creative and eventually we are all brought down to primal, entertainment consuming idiots. Time will tell.

After watching the film, I looked up the original book to see how much changed in the movie adaptation. Surprisingly, I found that the movie only covers the first half of the book. The second half apparently shows Bastian in Fantasia becoming somewhat evil and losing his humanity. I’ve always wanted to the read the book, ever since I first saw this film, and the promise of a deeper story and an entirely new second half of the story is very enticing.

While the effects are well done and I think it would still knock the socks off of little kids, it just didn’t hold up for me. I feel like the adult that used to be able to go to Narnia, but cannot remember the way. Where did I put my copy of The Neverending Story?