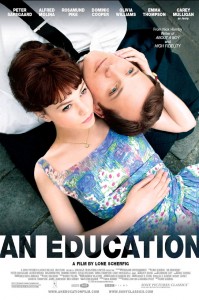 A dashing young man seduces a school girl. It’s been done before and I expected this movie to add something new. Nick Hornby wrote the script. He’s the guy who wrote the novels that became High Fidelity and About a Boy. I remember enjoying About a Boy despite expecting to hate it, so I was hoping for something of the same thing with An Education. Unfortunately, right from the moment when I saw that Peter Saarsgard was seducing Carey Mulligan, I had the rest of the story in my head if they chose to follow convention into the pit of cliché. They did just that. How disappointing.

One other thing that especially bothered me about the film was the music. Can we please stop having touching, slow piano music over scenes where I’m supposed to have an emotional response? I might actually have one if not for the sappy, clichéd film score. Music can be used to great effect in film, even touching piano music, but some of the music in An Education is ridiculously unnecessary and actually takes away from the potential power of the film.

It’s not a horrible film overall, it’s definitely watchable but the real question is who cares? The only real reason to see this is for Carey Mulligan and Peter Sarsgaard’s well-done performances. Most everything else is just boring and pointless.