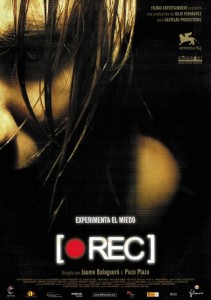 About two-thirds of the way in, REC suddenly spikes and everything just starts going batshit crazy. Just when you thought you were safe and in total control of your faculties you are yanked out of your comfort zone and thrown into a series of events that are happening with such rapid-fire intensity that you find yourself scrambling into confusion just like the characters on-screen.  It’s at this point I realized that, as cliché as it sounds, REC really is an experience. None of this faux-horseshit that James Cameron was peddling with Avatar, whose experience consisted of slapping on a pair of 3D glasses and enjoying a fun, loud, but stagnant visual feast… I’m talking about an experience in the sense that you are an active participant in the film. Your options are snuffed out one by one. Heroes who are supposed to save the day get bitten in the blink of an eye. What seems like an opportunity for escape suddenly becomes a deathtrap. At the very end, almost as if for pronounced effect, the directors remind us of the first cardinal rule of horror – that nothing is more frightening than the dark. Wow! REC is the first time in years that a zombie film is genuinely scary.

I did a have a few issues towards the end with some unnecessary exposition on the cause of the outbreak, which I always prefer to be vague. But fuck it, that‘s just personal taste. What REC does, it does extremely well. For two dudes in Spain to outdo what Romero himself did in Diary of the Dead is quite an accomplishment.